This past February I got outside to image both the Horsehead and Flame nebulas. This picture is the result of 68 2 minute exposures and 42 3 minute exposures. I wanted to get more, but the clouds in Ohio in February prevented that. This was taken from my rather light polluted driveway in New Bremen. The images was stacked with the new 64-bit Deep Sky Stacker and processed with Star Tools ver 1.6, and PhotoShop CS6. 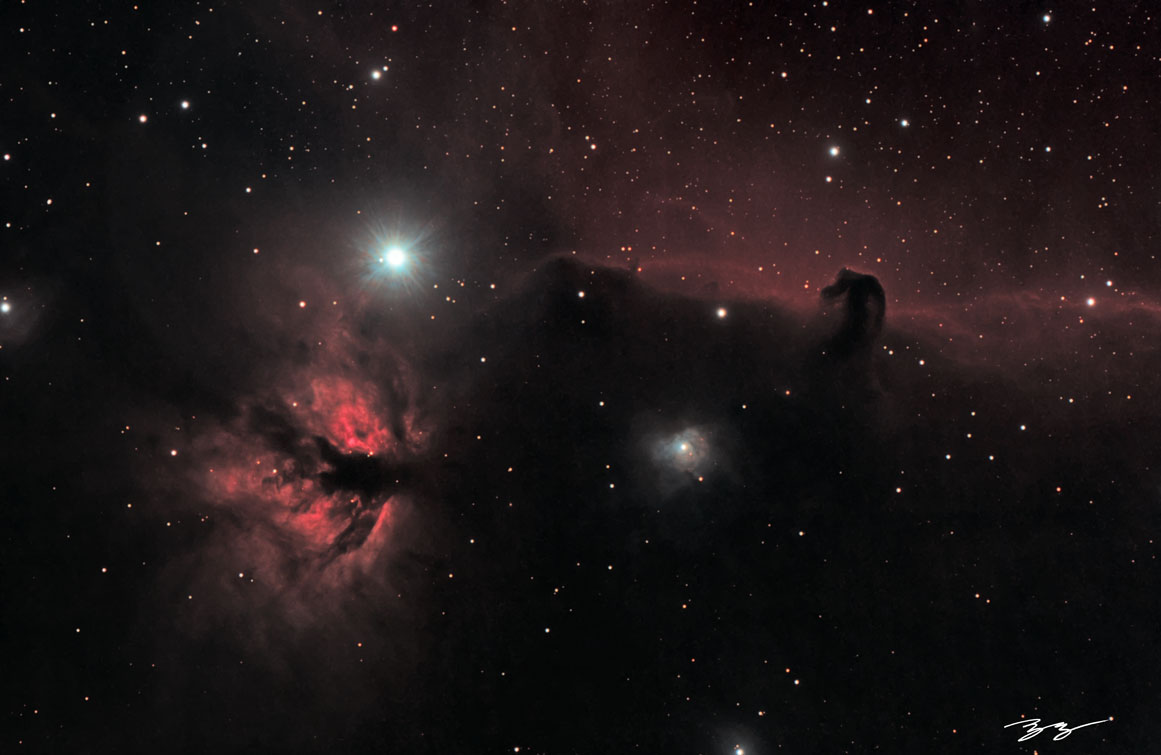 I spent the New Moon period of September 2016 at Cherry Springs state Park. During the 7 nights I had 4 good nights of which I was able to image 3 nights. My first night had technical difficulties due to operator error. While I intended to focus on the Veil Nebula complex, one night was forecast to be hazy, so I turned the telescope to the Double Cluster.

My second good night at the park looked to be the best night of the week so I took on the hardest object, Pickering’s Triangle. This is a dimmer object in the Veil and one I had never shot before. Processing proved challenging due to the extreme excess of stars and the fact that many stars were as bright as the nebula itself. This image consists of 40 5-minute exposures.

We then had two cloudy or rainy nights which let me catch up on my sleep. When it got clear again the forecast was for passing high clouds all night. So I turned away from the Western Veil and shot the Double Cluster. I don’t normally shoot open clusters, but this is an exceptional one. This image consists of 20 5-minute exposures

My last night at the park was also clear, but had passing high clouds. I decided to try the Eastern Veil. The passing high clouds caused me to lose my guide star at least a dozen times. In the end I had to throw out 16 images and crop down the end result quite a bit. The image even caused Star Tools some trouble, but a newer Alpha version worked. But I do think I captured a good view despite all the problems. This image consists of the best 23 5-minute exposures.

All images were captured with Sequence Generator Pro, my first use of this program, stacked with Nebulosity 4, and processed with Star Tools and Photoshop. All images were taken with my Gary Honis full spectrum Canon T1i and Explorer Scientific ES ED127 telescope.

Check out my other astro photos too.